Shane Warne and Michael Vaughan took on Piers Morgan, Jamie Redknapp and Ruud Gullit in a hickory golf challenge ahead of the Alfred Dunhill Links Championship; Watch throughout the weekend on Sky Sports Golf. 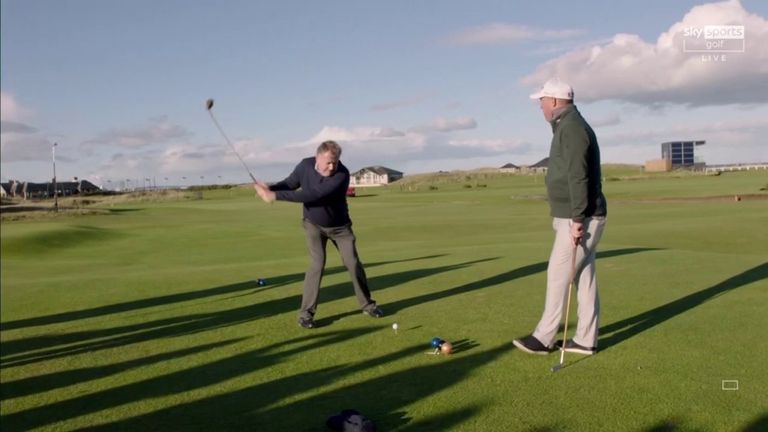 The Alfred Dunhill Links Championship gives stars of sport and showbiz the opportunity to tee it up alongside European Tour golfers, but how would they cope when using old equipment?

Ahead of this year's contest at the 'Home of Golf', cricket legends Shane Warne and Michael Vaughan took on former football greats Jamie Redknapp and Ruud Gullit in a special golf challenge at St Andrews.

The sporting pairs went head-to-head in a unique contest, where the two teams had to use hickory golf clubs synonymous with the early era of the sport.

TV presenter Piers Morgan joined the football team for the challenge and struggled to get to grips with the older clubs, with all the players taking time to adjust to the different equipment.

Which team would claim bragging rights in the hickory club challenge? Click on the video above and see for yourself!

The unique event consists of a US$5 million individual professional tournament and a team event where professionals join forces with an amateur playing partner, with the event played across three iconic links courses.

The field plays each of the layouts once before the leading 60 leading professionals and ties, along with the 20 lowest scoring pro-am teams, progress to the final round at the Old Course.

Watch the Alfred Dunhill Links Championship throughout the weekend live on Sky Sports. Live coverage continues on Saturday from 1pm and Sunday from midday on Sky Sports Golf.