Cameron Norrie: The Briton's ascent to Indian Wells champion and career-high world No 15

Cameron Norrie secured a first Masters 1000 title of his career at Indian Wells coming from a set down to defeat Georgia's Nikoloz Basilashvili; he has gone from 74th to world No 15 with his second title in his sixth final of 2021; he has now has his sights set on the ATP Finals in Turin

The rise of Cameron Norrie is one of improvement, endurance and competitive desire as he became the new British No 1 and collected the Masters 1000 title at Indian Wells in the space of a week.

Norrie is fast becoming a formidable presence on the ATP circuit after becoming the first Briton to win tennis' "fifth major".

He's had quite a year. Not only has he won Indian Wells and his first title, also on hardcourts, at Los Cabos, Mexico, in July, but the 26-year-old has made six finals in all - a feat matched only by world No 1 Novak Djokovic.

The Briton reached four other finals on three different surfaces - on the hardcourts of San Diego, the grass of Queen's, and on clay in Lyon and Estoril. 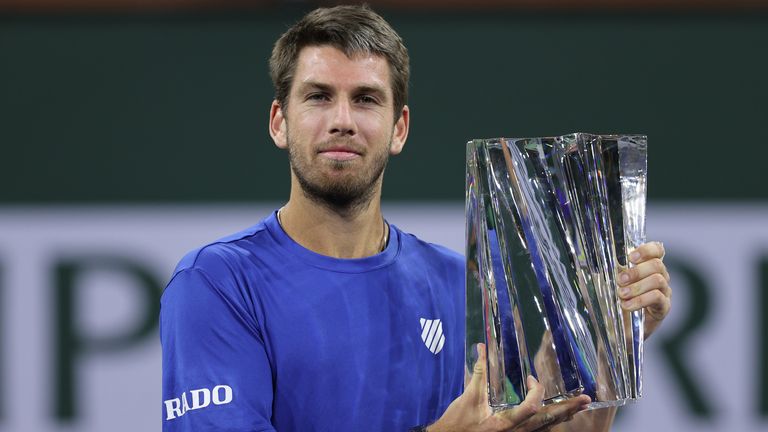 "I still don't really know what I'm experiencing," he said.

"It was an amazing couple of weeks and I'm so happy with how I treated all the occasions, all the big moments, all the matches. I'm so pleased to win my biggest title."

The Putney-based left-hander secured a top-20 place and the ranking as Britain's new No 1 - moving past Dan Evans - with his career-affirming run to title glory in the California desert.

He's hardly a new name on the scene but his low-key nature and steady rise up the rankings mean his profile is nothing like that of fellow Briton Emma Raducanu.

A talented runner, he played a number of sports as a child but showed early promise in tennis and as a junior was ranked in the world's top 10.

His British heritage placed him on the radar of the Lawn Tennis Association and, feeling a lack of support from the New Zealand federation, Norrie made the decision to move to London aged 16, switching allegiance in 2013.

The second key move in Norrie's career came in 2014 when he accepted a scholarship to Texas Christian University in the United States and quickly established himself as a star performer on the prestigious college circuit.

When he turned professional in 2017, he was the leading player in the system and ranked inside the world's top 300 having taken the opportunity to play on the tour when he could.

And @cam_norrie predicted it all 🤣

Having persuaded his former Texas team-mate and coach Facundo Lugones from Argentina to go on the road with him, Norrie quickly thrived in his new environment.

The title in California is also a feather in the cap for Lugones, who said: "I always thought he was unbelievably good. It's just a matter of when things are going to click and if he can stick to the things that are working and stick to the process, just not giving up, not being let down by tough moments like we had in the past, some terrible losses, a lot of finals.

"It didn't matter for him. He always had a bigger vision. He always woke up the next day and brought 120 per cent regardless what happened the day before.

"When you have someone with that ability, I think there's no limits."

The British No 1 does not have a standout weapon in his game but he is known for his impressive physical endurance and tremendous mental approach. His heavy topspin forehand, which contrasts with his very flat two-handed backhand, has become a real weapon and with each victory Norrie's confidence at the crunch moments of matches has grown.

He broke into the top 100 within a year of going pro and made one of the most impressive Davis Cup debuts of all time in February 2018 when he recovered from two sets down to defeat then world No 23 Roberto Bautista Agut on clay in Spain.

Norrie reached his first ATP final in Auckland the following year but 2021 has been the season where he has established himself at the very top of the game.

Every Indian Wells men's singles champion ranked outside the top 25:

His 46 match wins put him ahead of Novak Djokovic and his run in Indian Wells means he is firmly in the picture to qualify for the elite eight-man ATP Finals which will be held in Turin, with the tournament's long stay in London ending last year.

He currently sits in 10th position on 2,830 points, just 155 points behind Rafael Nadal who sits in eighth spot but the Spaniard will not play because of an ongoing foot problem. The man he needs to overhaul is Hubert Hurkacz, who lies 160 points ahead.

Norrie has already pulled out of the tournament in Antwerp but will play next week in Vienna and then at the Paris Masters and Stockholm Open. With 1,750 points up for grabs across the three events, there is still plenty to play for.

As well as leading Britain in the Davis Cup finals next month, he will also hope his showing in such an esteemed event as Indian Wells could serve as a springboard for going deeper into Grand Slams next year, having never made it into the second week of one of the four majors.

This year he suffered third-round losses to Rafael Nadal at the Australian and French opens, and to Roger Federer at Wimbledon.